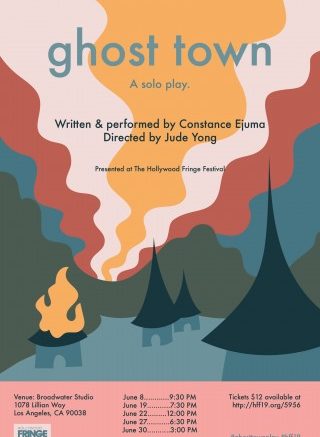 GHOST TOWN, a new solo play which tackles the ongoing ‘Anglophone Crisis’ in the central African nation of Cameroon, opens at the Hollywood Fringe Festival on June 8th, 2019. The play explores the conflicting political ideologies which are slowly driving Cameroon to civil war and tells the stories of average citizens who have become casualties; many of whom are now internally displaced or have become refugees in neighboring African countries. While the current political turmoil appears to be centered around Cameroon’s official languages, in reality, it magnifies the far-reaching and at times destructive consequences of colonialism.

“This crisis has had a profound impact on many Cameroonians, yet it hasn’t received nearly enough international attention or media coverage. Part of my goal in doing this play is to raise awareness,” says the writer.

SAG award-winning actress Constance Ejuma, known for her work in BLACK PANTHER, BEN & ARA, and THE GERMAN KING, is not only the star of this one-woman show but also makes her debut as a writer. Directing the play is Jude Yong, a Julliard trained actor and playwright known for directing FAR FROM AN ANGEL’S GAZE (play) and MAISON BLANCHE (TV pilot). As both artists are of Cameroonian descent, this collaboration is especially meaningful as it hits close to home.

“Cameroon has always been rich in allegory and satire,” Yong reflects. “When your brother or sister lights a fire to scare the rodents and ends up waking up the snakes that show up in your yard, is it arson, miscalculation or mischief? Is the hero the one who starts or the one who finishes? Is justice an order or a measure? Is this rebellion or revolution? What story is this turning out to be vs what story are we willing to tell ourselves?”

GHOST TOWN performance dates are June 8, 19, 22, 27 and 30. Tickets are $12 and are available for sale at the Hollywood Fringe website: https://www.hollywoodfringe.org/projects/5956.