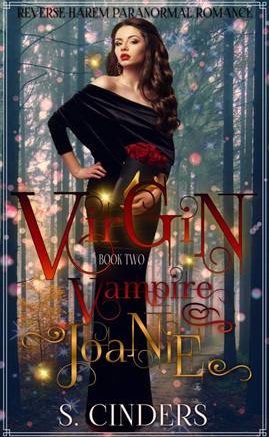 When Joanie’s best friend Vivian goes missing after prom she knows that there is something ‘the parents’ aren’t telling her.

The more she investigates the stranger things get. But it isn’t until she finds herself kidnapped and craving blood that things really get crazy.

Meet the Triple A’s, three of the hottest triplets known to humankind. Alden, Adrian, and Abel have been tasked with keeping Joanie safe.

S. CINDERS is a multi-genre author with over thirty titles ranging from sci-fi romance, historical romance, new adult romance, fractured fairy tales, to paranormal romance. S. CINDERS lives in the Midwest with her husband and two teenage sons who keep her on her toes. Known as the naughty romance author, you will remember her for her banter and engaging characters. Once you start, you won’t want to stop!

Alden shot a glare at his brothers. “Viv has a lot on her mind right now; things are unsteady in the vampire world.”

I barked out a laugh. “Unsteady? Yeah, her mom and dad are out there killing people, I would say that things are more than a little unsteady.”

My body felt weird, and I wasn’t sure if I needed more blood or maybe just a fifth of vodka. Not that I was a drinker, but I felt edgy, like I needed to move. I walked over to my door and felt the lock. Of course, it had been turned. How charming was it that at the age of eighteen I was getting locked in my room?

Being the teenager that I was, the only thing I could do was rebel, right? Wasn’t that what all teenagers do? I opened the window and peered down. There were two flights, and I wondered if the ledge was wide enough for me to climb out on.

This is a well written book and great new series. I would definitely recommend this read. – Amazon Reviewer

The story follows on from Vivian bk 1 and is told in multiple POVs. Joanie is Vivian’s best friend. When Vivian goes missing, Joanie knows there is more to the story than what all the parents are telling her.

When Joanie’s world flips on itself she finds out that people are not who they seemed and she is not what she thought she was.

Reunited with Vivian, Joanie is about to discover secrets that will ensure her life is never the same. Betrayal will be felt by everyone and more secrets will be exposed. Who will be left standing? – Goodreads Reviewer