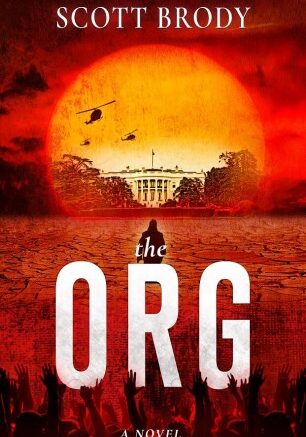 Scott Brody’s The Org is a Wake-Up Call in Tune with the Times!

Los Angeles, CA – Some books are ahead of their time, as if the author saw the future into a magic crystal ball, and Scott Brody’s “The Org” is one of them. A project of passion that took several years to complete, this riveting political thriller predicts many of the challenges the USA has been facing since the COVID-19 outbreak, including today’s political tension, growing panic and the beginning of Death Squads.

Based on Scott Brody’s own experiences in a political cult, “The Org” is a heart-pounding thriller with a complex plot that weaves ambition, politics, and cults. It is also a wake up call to look beyond the surface, reclaim our power, and remember our smallest actions have a global impact.

“The Org” is set in the near future when the effects of the global climate crisis are catastrophic, causing food shortages, deteriorating weather, and growing panic. Marianne Wolf, a member of the Org, is murder which sets off a chain of events and the killing attracts attention to the tiny cultish EcoPartyUSA, dedicated to fighting the worsening global climate crisis.

As more people are listening to presidential nominee Beloit’s charismatic and powerful message, his polling numbers start surging. Seeing this, current President Leo Pine sends his people to battle Beloit’s supporters on the streets. The country is unrest, with fighting and chaos in the streets. Beloit fights back, pushing his people to the breaking point, and decides it is time to declare for his run for President as a Democrat.

In the mean time, Marianne’s ex-boyfriend, James Roth, and journalist Walt Jones are searching for Marianne’s killers. What they find in their investigation could derail Beloit’s campaign. Realizing this, Beloit’s top lieutenant, Juan Garcia, decides it’s time for him to act and starts a plan to silence any threats to the Beloit campaign once and for all.

“The Org” is available in paperback and digital format on Amazon and other major retailers.

Scott Brody grew up in a political home in New York, where the older generations met, supported candidates, and argued about politics.

In the ’60s, as a teenager, he joined in the political and cultural ferment of the time. He marched against the war in Vietnam, listened to Jean Shepherd on WOR and WBAI until all hours, read Ray Bradbury and Ramparts. The summer he graduated from high school, he went to Woodstock.

The author spent a few years in a political group similar to the one fictionally depicted in “The Org.” In 1976, after graduating college, he ran for Congress on the US Labor Party. After that, he got into broadcasting—a career he still pursues, managing radio stations in Southern California and New England.

Scott Brody is happily married, has a daughter and two sons, and is the proud grandfather of a baby boy. He lives with his wife, Judy, in Southern California.