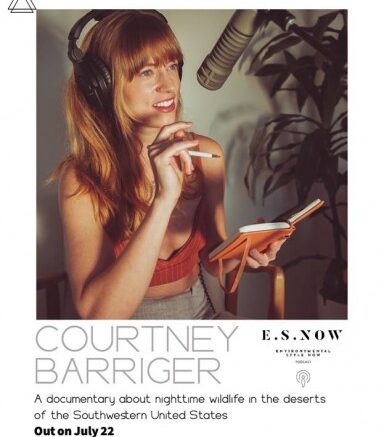 Inspired by her time in the fashion industry, model / artist Courtney Barriger is catching fire in the Eco Ethical Fashion Movement.

Inspired by the environmental and humanitarian horrors she witnessed in S.E.Asia, the artist puts an authentic touch on her weighty interviews covering fabric toxicity, plastic waste, the inequity suffered by garment workers overseas, and then some in this Q&A style podcast.

“I found myself drowning in information about how terrible the fashion industry is on people and the planet while designing my clothing line. It only makes sense to offer this to the public for free. And who knows better than Fair Trade, Peta, Harvard Climate Change Experts and all the other world class experts? The more we know, the better we can make informed decisions to care for our planet,” says Barriger.

To Courtney, working in eco ethical fashion is more than following her calling to create. It was a healing process since she began her expansion into sustainable design and storytelling while she was homeless – broke and couch surfing. Research, development and design kept her from crashing into depression, allowing her to embrace innovation and self expression at an exceptionally vulnerable time. By channeling that intense need for direction, Barriger uncovered the formula she uses now to influence the world of fashion: sustainable designs, eco fashion education, and eco fashion storytelling.

Courtney Barriger launched the episode of E.S.Now Podcast with Adrian Grenier at the end of August, and has a lineup of celebrity studded Red Carpet Green Dress, Lab Chief at Cornell Veterinary Toxicology Lab, Peta, Fair Wear, and many many more.

E.S.Now is rated five stars on ​Apple Podcasts​ and ​Spotify​, and is available on all major podcast streaming platforms.

Courtney Barriger is an established model/actor, writer, fashion designer and fine artist. Courtney is known for winning reality tv series America’s It Girl, directing fashion films, and being named “The Future of Fashion” by the United Nations Association.

A local to Jacksonville Florida for most her life, she graduated from The University of North Florida with a B.S. in Communications and International Studies with an emphasis on film studies, and quickly published her first book the summer after graduation. Since that time, she has been across the globe as a model, actress, fine artist, fashion designer and writer, working with some of the top names in each of their fields.

Adrian Grenier is most known for his role on the HBO hit Entourage, but has noticeably grown into an activist for ocean conservation. In 2015 he co-founded ​Lonely Whale​ (https://www.lonelywhale.org/), a non profit that helps create ocean awareness campaigns by collaborating with non-profits, private companies, influencers, and more. Grenier has launched successful campaigns like the #StopSucking campaign in Portland against single use straws. The city, and many others, followed this with legislative action banning the use of plastic straws directly after this campaign!