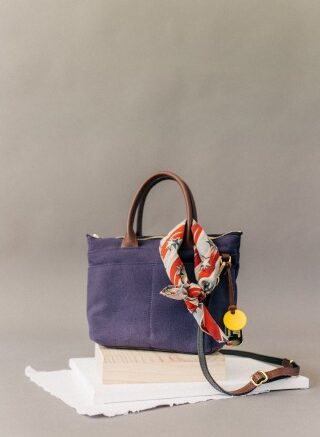 However, there’s something everyone can celebrate this November 3rd, regardless of political views or which candidates and parties they support. The upcoming election marks 100 years of voting rights for women, a century of women casting their ballots and making their voices heard.

To mark this momentous anniversary, R. Riveter has released a limited-edition “Victory for Women” handbag.

The female vote is responsible for more than meets the eye. In the last 100 years of women going to the polls to vote, there has been a steady trend: More change for good. That’s right. The women’s vote has the power to effect positive change in the world. Women have been leaders, rallying for better education and healthcare — and that is a beautiful thing. Like the women who came before you, proudly let your voice be heard (because you are worth listening to) — women’s votes matter. Women can change the world.

Each R. Riveter handbag takes a journey across the country before arriving at your door. Components are crafted by independent military spouses in their homes around the nation and shipped to R. Riveter’s FabShop, where it’s assembled into a one-of-a-kind product.

A paired down take on our best selling handbag; The Dot is a canvas and leather satchel that will carry you through the day.

INSPIRATION BEHIND THE NAME

The Dot is named for Dorothy Braden, a high school physics and french teacher until she heard that the Army was looking for college-educated southern teachers. According to Dorothy, the details of the position were vague, but she was “up for anything at that point.”

Dot learned Japanese and became an expert cryptographer. She even learned the Japanese had surrendered before President Truman did. A top secret job, Dot and her fellow cryptographers were threatened with espionage charges, punishable by life in prison if they revealed the nature of their work.

In 2017, after the NSA declassified it, Dot was convinced to tell her remarkable story, to be shared for generations to come.

R. Riveter is a military spouse owned company that began in 2011 in a small attic with one sewing machine + a bit of canvas. Now, providing military spouses across the country with mobile, flexible income and the opportunity to produce quality, American-made handbags and purses, R. Riveter has grown into a bold and achievable mission shared by many: to inspire, engage, and empower.