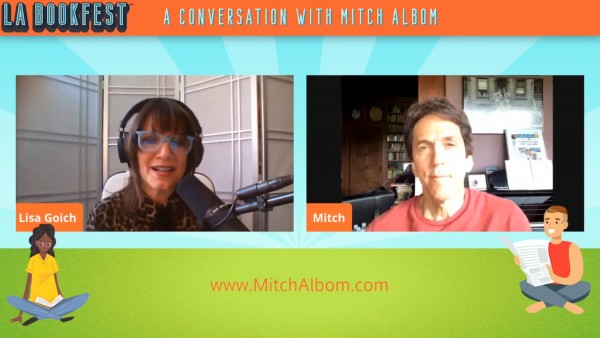 Los Angeles, CA – LA BookFest organizers and attendees declare success in delivering a virtual book festival for fans around the world on May 9, 2020.  With nearly 10,000 visitors experiencing a full slate of festival activities during and leading up to the day of the event, the ground-breaking online book fair was organized from concept to delivery in less than six weeks. Programming content will be re-released starting Sunday, May 17, and another festival is being planned for fall of 2020.

Desireé Duffy is the Founder of LA BookFest, as well of Black Château, Books That Make You, and is also the head organizer for TEDxResedaBlvd. She hosted the event, and says, “LA BookFest defied expectations, even my own. Originally, I thought we’d simply do a Facebook party. However, the concept quickly snowballed while brainstorming with the Black Château team. We imagined what was possible and then built it in record-time. Technology converged with creativity as we developed the site, created the programming, and designed an entirely new brand in six weeks.”

Due to overwhelming demand, the programming will be made available as re-watchable video content. Starting the week of May 17th, the panels, conversations and keynotes will be posted chronologically on the Books That Make You YouTube Page in playlists. Subscribers to the YouTube page who have rung the notification bell will be notified via email as videos are released.

The LA BookFest consists of an opening keynote, a closing power talk, two conversations and six panel discussions. There are several mini segments, such as cooking with celebrity chef-turned writer David Ruggerio, Mindfulness Moments with author Ora Nadrich, and Embracing Crankiness with crankiness expert Steven Joseph, that will also be released as a playlist.

The LA BookFest live After Party was recorded and will be re-released, too. It features actor, activist and restauranteur, Danny Trejo, reading the children’s classic, Goodnight Moon. The After Party has musical performances from Kiera Lyons and Brandyn Cross, artist Dacey Villarreal from Art Brut 27 creates a festival-themed painting, plus several participants of the fest stopping by to hang out.

Currently, there is content viewable on the LA BookFest website, including; videos of authors reading excerpts on the “Reading Room” page, “Virtual Booths” featuring many of the LA BookFest partners, and a “Books” page with all the books from LA BookFest authors.

Among those who participated in the LA BookFest is Gerald Everett Jones, author, editor and host of The Get Published! Podcast. He moderates the Power Pitching Panel and is a member of the Allure of the Memoir Panel. Jones says, “LA BookFest was stunning, professional, engaging, motivating, ground-breaking, and sensational! It was a privilege to participate. I was particularly impressed by Mitch Albom, Lori H. Schwartz, and Sarah Kendzior. The event really lined up some disruptive voices, and I mean that in the Silicon Valley sense of the word! The production values were stellar, and the whole effort is on the leading edge of what’s going on. My head is still spinning!”

Sue William Silverman, award-winning author of seven books, including her most recent memoir, How to Survive Death and Other Inconveniences, was also on the Allure of the Memoir panel, and says, “A big congratulations on doing an outstanding job of accomplishing this incredible feat of a virtual book festival, and pulling it off with professionalism, excitement, and amazing content. I attended most of the sessions, and what you achieved was extraordinary! It was a significant highlight of my virtual book tour. What an extraordinary festival held at an unprecedented time in our nation’s history. Because of the social isolation caused by the pandemic, we need books and art now more than ever to help us feel connected to each other. Your festival was both a cultural celebration and a public service.”

Raye Mitchell, JD, MBA, Boss Girl and Chief Content Officer, The Genius Agency, Inc., delivered the LA BookFest Closing Power Talk. She says, “I am delighted to be part of the inaugural LA BookFest. Is a boss genius of an idea executed with pinpoint expertise and precision. Bravo Desireé and Black Château, you just raised the bar of what a great creative event looks like and feels like.”

For the full description and more information, visit the LA BookFest website. People can still subscribe to receive updates on the release of content and future LA BookFest news. The hashtag #LABookFest2020 is also being used on social media.

Another BookFest is in the initial stages of planning for Fall of 2020. Whether communities are still social distancing or not, the online event intends to give people the option of joining virtually for a global celebration of books, literature, and ideas.

Duffy adds, “When innovation, passion and agility come together, we can achieve anything. The LA BookFest is a testament to how adaptive we all can be. I’m proud of the LA BookFest and of all the work our team put into creating this virtual event in record time. Though the bar will be raised, I look forward to doing it again in the fall of 2020.”

ABOUT THE LA BOOKFEST

Join us on a bookish adventure— the LA BookFest is a collaboration bringing together authors, readers, publishing professionals, journalists, business leaders, and creatives from around the world for an online celebration of books and ideas. The LA BookFest is presented by Black Château and Books That Make You. Desireé Duffy is the founder of both, as well as the lead organizer for TEDxResedaBlvd, the annual Beach Bound Book Bash, Scary Stories Around the Pitfire, and JingleBooks. Black Château is an award-winning marketing and public relations agency located in Southern California. It specializes in promoting authors, books, small press, personality brands, and creative individuals from around the world with a full-spectrum of services. The company’s motto is: We believe in storytellers. Black Château’s sister company, Books That Make You, is a multi-media brand that promotes books through its website, radio show/podcast, and events.