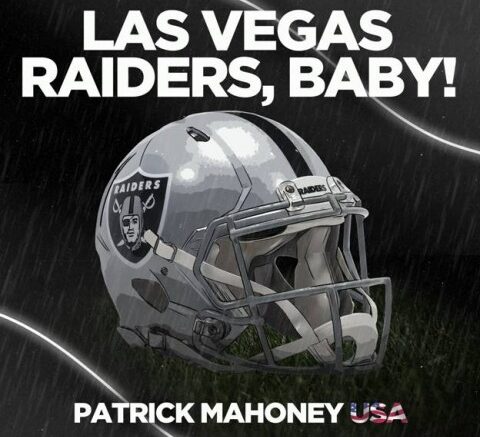 Las Vegas – Sept 7, 2020 – In advance of the upcoming football season, a local performer has released an energetic rock anthem celebrating the Entertainment Capital of the World and its newly-minted football team, the Las Vegas Raiders.

The Raiders moved to Las Vegas this year from Oakland, California. Prior to playing Oakland, they played in Los Angeles until 1994. They are part of the National Football League’s American Football Conference (AFC) West division.

Mahoney, who performs in Las Vegas, wanted to create the perfect rock anthem for the Raider Nation.

“I am a lover of all things Las Vegas and I felt very passionate about creating an energetic, uplifting song for such an incredible city,” Mahoney said. “It was a huge honor for me to sing this song cheering on our new football team with a memorable chorus and an epic guitar solo. The Raider Nation will love it.”

The Raiders, who will play their home games at Allegiant Stadium in Paradise, Nevada, are scheduled to play their first game against the Carolina Panthers at Noon on Sunday, Sept. 13. The game will be televised on CBS.

Originally from Dublin, Ireland, Patrick Mahoney sings at corporate venues on the Las Vegas Strip, including the Nobu Hotel at Caesar’s Palace and The Four Seasons Hotel at the Mandalay Bay Resort. Mahoney, who writes original music and creates his own shows, has performed in more than 40 countries and has worked with internationally-acclaimed recording artists including Sinead O’Connor, David Gray, Ron Dante, and Pablo Cruise. He has several song releases planned for the coming months.