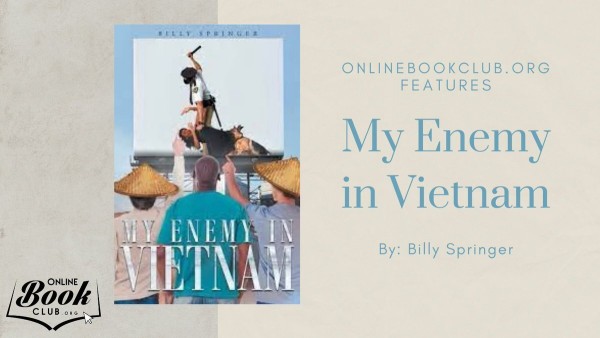 Manchester, CT – January 27, 2022 – My Enemy in Vietnam by Billy Springer has been named Book of the Month for March 2022. Called the “real story of my personal experience in Vietnam”, this account by a black author shines a spotlight on just how serious the issue of race discrimination was amongst American troops then. In the description of his book for Amazon, Billy writes, “I feared for my life every day, not from the Viet Cong. I had to watch my back 24-7 from men who wore the same uniform as me.” In an official OnlineBookClub.org interview with Sarah, Springer added, “A lot of lies were told about Vietnam, and I wanted to tell the truth.”

MsH2K, in their official OnlineBookClub.org review, wrote that, “Springer is a vivid storyteller, and his narratives are brief but powerful. They share his personal interactions with both fellow service members and the Vietnamese people.” MsH2K continued that Springer “described racial taunts and retaliation at his command in Vietnam because of the civil rights protests back in the United States,” and that “I recommend reading this short novel to discover how Billy Springer stayed true to his country and his conscience during the Vietnam War.”

OnlineBookClub.org is on its way to its sixteenth anniversary, having accumulated over three million followers along the way. Forums include book reviews, general discussions, conversations focused on specific books, and interviews with over a hundred authors. Its OBC Reader app, released October 31st, 2021 by OnlineBookClub.org’s founder, Scott Hughes, is one of his most recent creations for book lovers. A published author and proud father of two, Scott recently penned a poem titled “Show Me Your Naked Pain”. That ended up being the announcement of a $10,000 poetry and art contest. Accepting entries through March 15th, 2022, it gives winners the chance to have their work published in a major, highly publicized anthology.