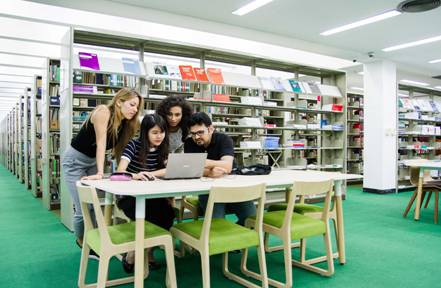 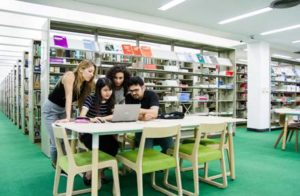 Thirteen ambassadors, 12 CEOs and Managing Directors from the corporate sector, and four former ministers were among the dignitaries who participated in the opening ceremony of the modernized library of the Asian Institute of Technology (AIT), which was inaugurated by Her Royal Highness Princess Maha Chakri Sirindhorn.

The unveiling of the AIT library marked the grand finale of a process of renovation and modernization of the library that was devastated by the Great Thailand Flood of 2011. Having lost a significant portion of its collections to the flood, the inauguration ceremony on 27 April 2018 was a rare occasion when besides 13 ambassadors, representatives of five embassies, six CEOs, two company presidents and three Managing Directors; and three former ministers got together to witness the inauguration.

“This could be one of the few occasions when a library inauguration has participation from 18 embassies, and representatives from all over the world,” Prof. Worsak Kanok-Nukulchai, AIT President remarked. Ambassadors of Canada, Cambodia, China, Egypt, Kazakhstan, Myanmar, Nigeria,Pakistan, Russia, Sri Lanka, Timor-Leste, Turkey, and Ukraine participated in the event. So did representatives of embassies of Austria, Indonesia, Laos, Malaysia, and Nepal. While the ambassador of Canada, H.E. Ms. Donica Pottie, and the ambassador of China H.E. Mr. Lyu Jian (China) were among the five ambassadors who are members of AIT Board of Trustees; eight ambassadors including H.E. Mr. Kirill Mikhailovich Barskiy (Russia) attended as special guests on the occasion.

It was the donation of Princess Sirindhorn that kick-started the library campaign in 2015, and which resulted in a total collection of 80 million THB for the library — the most successful fundraising campaign in AIT history. She also served as the Honorary Chairperson of the International Advisory Committee for the Library Modernization. At the ceremony, HRH Princess Sirindhorn also honored 28 donors who had made significant contribution towards the Library Fundraising Campaign.

Twenty-eight donors were also honored by the Princess, and this included Chairperson of the AIT Board of Trustees, Dr. Subin Pinkayan and Prof. Worsak. Besides Dr. Subin, who is a former Minister (Foreign Affairs, Commerce, and University Affairs), other former ministers who attended included former Deputy Prime Minister of Thailand, Dr. Sahas Bunditkul, and Former Minister of Foreign Affairs of Thailand H.E. Prof. Kantathi Suphamongkhon.