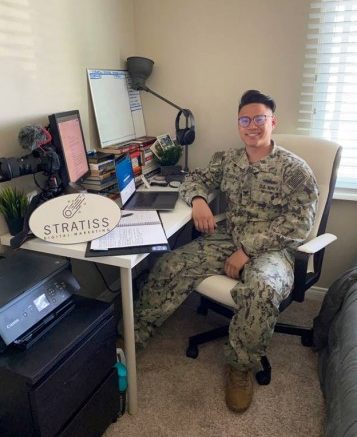 San Diego, CA – Entrepreneur, Active Duty Sailor, and Filipino-American who has built a six-figure business in the confines of his bedroom with a laptop and unlimited potential.

Joshua Villareal has been serving in the United States Navy since he enlisted at 17-years old. While touring the world on the U.S.S New Orleans, he used his free time to read books on business and entrepreneurship. His motivation started when he was around 15 years old when he started selling anything that he thought would make him a profit, making him an “accidental entrepreneur” during that time.

Having a stable source of income was also another motivating factor on his part. When his parents lost their jobs during the US recession, his family had to move back to the Philippines. From that point, he lived back and forth with this grandmother and aunts. When his family’s situation worsened in 2014 due to unforeseen financial circumstances, he became the bonafide breadwinner for his family.

Because of this unprecedented self-dependence, his aspirations would focus on three things: financial freedom, life values, and experiences. This drove him into the rabbit hole of entrepreneurship. While people his age would play video games or go out partying, his primary addiction was consuming as much knowledge as he can from any source that he found useful. In addition, he started connecting with like-minded people who could fuel his mind with ideas.

From dabbling in e-commerce to digital arbitrage, he soon realised that all you really need is a great product and a marketing strategy.

Josh spent thousands of dollars on researching and testing the best marketing techniques while also learning from some of the digital marketing gurus like Alex Mehr, who was listed on Forbes for generating $1 billion dollars in sales revenue. Josh became fortunate enough to become one of his private students.

Josh decided to start a digital marketing company in 2018 with a laptop and a mindset for success. He made cold calls, pitched to clients and developed strategies in his bedroom while keeping his day job in the United States Navy.

Fast-forward to 2020, as a 23-year old, his company in San Diego, Stratiss Digital Marketing, is already making six figures a year.  The company is well on its way to hit the 7-figure mark by the end of this year. His digital agency focuses on small businesses but specializes in marketing strategies for auto body shops across the country. Josh also does marketing consulting for companies like Open X, which is a rising start-up bridging the gap between talent and industry. CEO and founder of Open X, Cody James, was listed on “Forbe’s 30 Under 30.”

This dream doesn’t stop here. One day, he hopes to be a contributor for the Los Angeles Lakers.