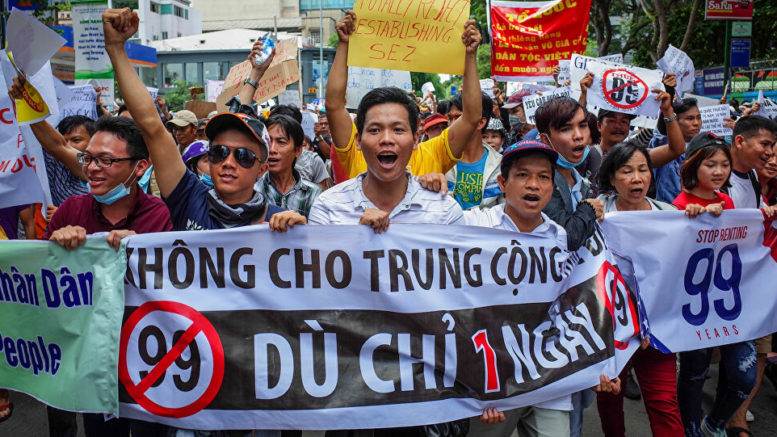 Over the past decades, China has gradually invaded the East Sea of Vietnam through acts of bribery, coercion, provocation, aggression, militarization, status change and violations of Freedom of Navigation.

Recently, from April 13 to April 19, 2020, China took advantage of the Wuhan pandemic (COVID-19) and attempted to finalize its claims in the East Sea of Vietnam by issuing Note Verbale CML/42/2020 to the United Nations. China provocatively and arbitrarily set up two districts, Nansha and Xisha, in order to legitimize its administrative rule, threaten Vietnam and the other sovereign states in the East Sea of Vietnam, and get them to abandon the disputed islands. In addition, China plans to launch an Air Defense Identification Area (ADIZ) to control the whole airspace of Southeast Asia and threaten the security of all Southeast Asian nations.

Based on history, geography, and the UN Convention on the Law of the Sea of 1982 (UNCLOS), the Paracel Islands and most of the Spratly Islands are under the sovereignty of Vietnam.

Although this time the Vietnamese government did speak up, it was merely a feeble formality.

The environment and the seabeds throughout Southeast Asia have been devastated by China in violation of the International Law of the Sea. Chinese invasion and expansion, both on the sea and in the air, threaten the survival of all of Southeast Asia as well as the peace and security of the Indian Pacific region.

Faced with this situation, we, representatives of organizations fighting for human rights, democracy and freedom for Vietnam, using social networking sites, are conducting a referendum of the Vietnamese people on one question, “Faced with China’s invasion in the East Sea of Vietnam, do you think Vietnam should sue China in international courts?”*

As of today, more than half a million Vietnamese have participated in this referendum and 58 organizations have supported it, with 95% of respondents wanting to sue.

An Eastern proverb says, “The People’s will is God’s will.” Only nations are everlasting, and a country’s true owners are its people. This Open Letter reflects the will of the Vietnamese people, who are for Territorial Integrity, Respect for Vietnam’s Sovereignty, and Complete Independence from China. We send this Open Letter to you, esteemed leaders of free nations that respect peace and justice, hoping to convey the will of the vast majority of the people of Vietnam. We ask that you unanimously and earnestly support the Vietnamese people by urging, promoting, and supporting litigation against China before the international courts.

In particular, we respectfully send this letter to the member countries of ASEAN so that you can understand and strongly support the will of the Vietnamese people. Hopefully, their aspirations, expressed through the referendum, will assist ASEAN in protecting the rights, security, peace, and development of all the nations of Southeast Asia and the Indo-Pacific region in the face of China’s aggression.

Thank you for your consideration.

ALLIANCE FOR A FREE AND DEMOCRATIC VIETNAM

ALLIANCE FOR DEMOCRACY IN VIETNAM

ASSEMBLY FOR DEMOCRACY IN VIETNAM

Association of Vietnamese Refugees of Federal Republic of Germany

Representative Committee of the Popular Bloc of Cao Dai Church

REPUBLIC OF VIETNAM NEXT GENERATIONS

THE MOVEMENT OF PERFORMING ARTISTS AND WRITERS FOR A FUTURE VIETNAM