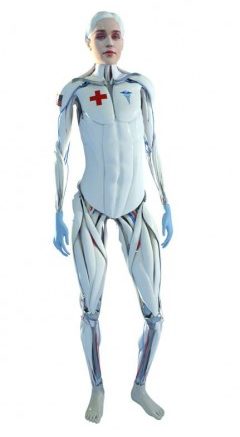 Sacramento, CA – November 29th, 2019 – 2018 was the year inventor Steve Favis was granted his first patent by the United States Patent and Trademark Office (Patent# US9962831B2). It was a human looking robot that is capable of doing nearly any human task. The robot is programmed and trained in a simulation environment instead of the real world.

“Think of growing a human from infancy to adulthood in a matter of weeks or months-that’s how the machine is trained-that quickly. With our simulation and training methods we can make minutes of training equivalent to days or weeks of real-world human paced learning. Then the learned AI Model is brought to the real-world system,” said Steve Favis.

Steve has been amazed at how anti-climactic the invention has been.

“I’ve approached dozens of decision makers in defense and in government research contracting. They are impressed, but nothing has come to fruition. It’s quite alarming. I mean how many other important innovations are set on the back burner, ignored or shelved?”.

Concerned about the technology and its implications, Steve filed for export controls through the US Bureau of Industry and Security hoping that there would be some check and balances for critical technology innovations from being exported by US competitors.

Steve Said “We were classified EAR 99, which means Artificial General Intelligence is an exportable technology. I’m not sure why a robot that can make decisions as well as most humans, capable of working 22 hours a day, and can have their occupation changed within a few minutes isn’t a critical tech.”

Steve even tried the private sector.

“Billionaires aren’t hard to reach nowadays. I was hoping there would be some interest in at least maturing the technology.” Said Steve.

“The implications [of AGI] are far reaching, it could be economically devastating for economies or countries without it. Weaponization is a reality, the only thing that can fight AI is another AI, from land space and air. AGI to me can be more economically devastating than the invention of the firearm and steam engine combined. A humanoid with AGI using my methods can run for several years or longer with very low maintenance and they can manufacture themselves. Industries clearly affected are agriculture, healthcare, defense, manufacturing, service industries, transportation and much more,” said Steve.

Steve was awarded the 2018 Top Innovator award for the United States by Intel for his social robotics inventions. He started learning computer programming at six years of age in 1984 and has multiple patents in consumer electronics and Advanced Robotics.