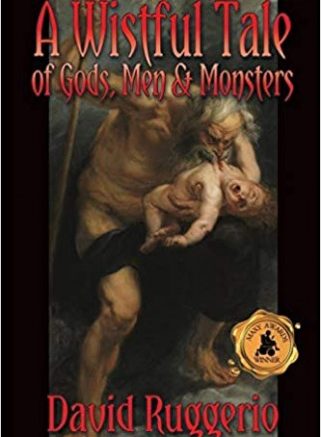 This Halloween eve “A Wistful Tale of Gods, Men and Monsters” will Frighten Horror Fiction Enthusiasts!

Forest Hills, NY – Author and TV personality, David Ruggerio releases A Wistful Tale of Gods, Men and Monsters this October 30. Appropriately releasing on Halloween eve, his first novel is written for horror fans of all ages. Winner of the Maxy Award for Best Horror 2019, “A Wistful Tale” is written in the classic horror style and reads like a movie. Ruggerio’s goal is to frighten the reader and leave them curious for more.

In a recent interview, David Ruggerio tells why he crossed over from cookbooks to horror, “I am a horror aficionado; I especially love the classics. I’ve read everyone from Mary Shelly to Bram Stoker to Washington Irving. I wanted to write a book that people would pick up again and again during the Halloween season. I always incorporate real towns and real places; I believe that makes it spookier. In addition, I incorporated an array of villains, heroes, and a few characters who bring a bit of levity to the story.”

“A Wistful Tale of Gods, Men and Monsters” is set in the sleepy village of Brunswick, NY. Main Character William Willowsby discovers the town’s dark secrets and must face the evil that has been hidden for generations. An old graveyard holds the horror and the children of the town are in grave danger.

“A Wistful Tale of Gods, Men and Monsters” is a page-turning, nail-biting, terrifying read that readers will want to pick up every Halloween night. Advanced readers praise the novel for its classic horror feel, and Manhattan Book Review states that Ruggerio’s horror novel “brings to mind what you might get if director Tim Burton wrote horror novels.”

“A Wistful Tale” is available for pre-order on Amazon.

David Ruggerio is a well-known celebrity chef and restaurant owner in New York City. He was honored in 1995 by noted vintner Robert Mondavi as one of the thirteen best young chefs in America. He went on to star in his own popular PBS cooking series entitled, Little Italy with David Ruggerio. He later went on to star in his own iconic series on Food Network entitled, Ruggerio to Go. David has written two acclaimed cookbooks, which were published by Artisan Books, “Little Italy with David Ruggerio,” and “David Ruggerio’s Italian Kitchen.”