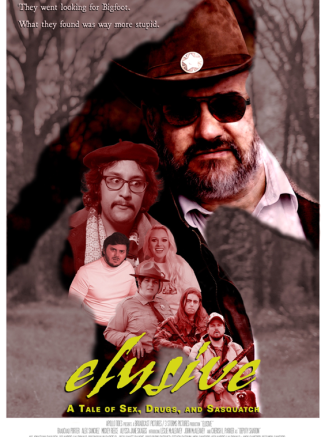 Sep 10, 2022 – Many films have been made about Bigfoot, but none as stupidly entertaining as the new comedy feature film “Elusive.”

Distributed by Apollo Tides, the mockumentary is currently streaming on Amazon Prime Video, Tubi, Plex and a variety of streaming platforms.

The film documents the travels of a cryptozoologist and his delusional cameraman as they set off in search of Bigfoot in the backwoods of Oklahoma. They encounter a variety of quirky and colorful characters along the way, each with their own agenda.

The film has received rave reviews. Brett Fieldcamp of the Oklahoma City Free Press said, “The end result is so much more than the dumb, dirty, ridiculous mockumentary you might expect going in. It’s a surprising and effective look at insecurity, shame, responsibility, and all the lies, from the innocuous to the mythical, that we tell ourselves, and each other, to make sense of the world. Especially as parents.”

“Elusive” features the talents of BradChad Porter as the cryptozoologist, Wayne Nicholson; Alex Sanchez as the delusional film student, Jimmy; Cherish L. Parker as Deputy Sharon; and cult filmmaker Mickey Reece (director of festival hit “Country Gold”) as Randy, a militant survivalist who believes Bigfoot has mystical, magical powers and is somehow involved in the “deep state” in an effort to subvert American values.

The film was shot in central Oklahoma during a single week in Nov. 2020 during the COVID-19 pandemic. Runtime is 1 hour and 33 minutes.

Co-written and edited by Andrew McDonald, “Elusive” was co-written and directed by Nick Sanford. It was produced by Chris Butcher and Steven Patchin.

Individuals can view the trailer for a sneak peek at what’s in store. “Elusive” had a limited theatrical run and is now entertaining audiences on streaming services, with one Letterboxd reviewer saying, “Crass jokes rarely ever land with me, but ‘Elusive’ brought a joke that was not only good, but in context made me teary eyed.”

The mockumentary hilariously explores modern mythology and Internet meme culture, why we perpetuate the legend of Bigfoot, and the relationships between fathers and sons. The film’s tagline is apt: “Come for the Bigfoot jokes. Stay for the father issues.”

Cast and crew questions, along with review screener requests, can be addressed to ApolloTidesLLC@gmail.com