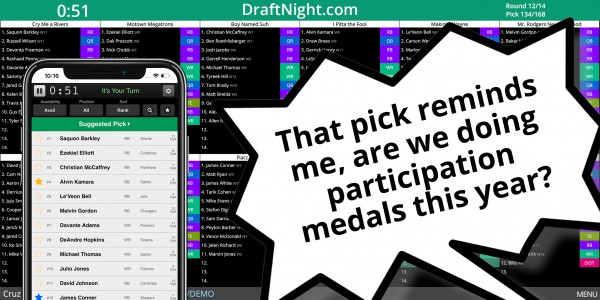 Draft Night is taking fantasy football to a new level of participation in which the draft board itself provides its own smack talk after each pick. It includes more than 150 G/PG comments that are voiced by a professional voice actor, along with several sound effects.

“We had a lot of fun coming up with great comments for SmackMode but were careful to focus on being fun and entertaining without being rude or mean” – Josh Wright, Draft Night Founder

With Draft Night, each member of a league can make picks from their own device encompassingdesktops, laptops, tablets, and iPhone or Android phones. Picks can be shown live and in real-time using a projector. Draft Night was first introduced in 2013 and quickly became one of the most popular fantasy football draft software options available, trusted by more than 200,000 teams. The addition of SmackMode levels up the fun.

A free 15-minute demo of the software is available that enables players to see how the draft board works and experience it for themselves. It can be purchased on the Draft Night website, the Apple Store for iPhone and iPad. Only one person needs to purchase the app, since league members get free access. Be sure to turn on SmackMode.

Using their keyboard, individuals can search for NFL players by name, ranking, position, and availability. There’s nothing quite like the excitement of hosting a fantasy football draft pick party with Draft Night. The addition of SmackMode complements the fun and camaraderie when team members get their first listen at what SmackMode has to say.