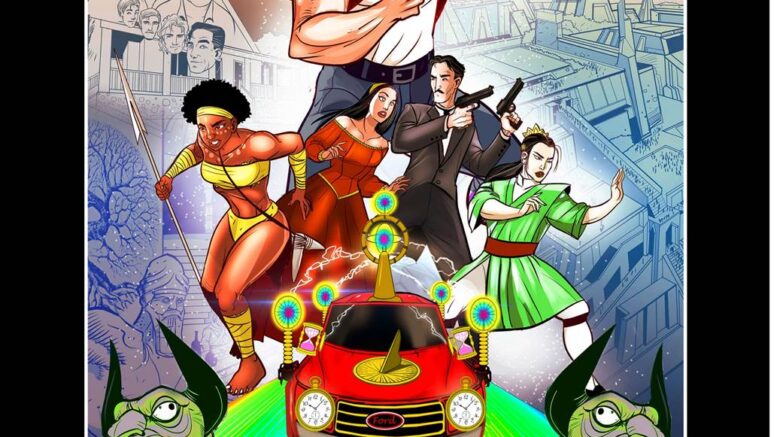 From the man who brought you “The Hair-Raising Adventures of JAYMS BLONDE” comes “JOE TIME TRUCKER and the Fate of the Annunaki.”

An average Joe who tinkers with time. When Joe is dumped by another girlfriend, he decides to take a risk on his future. He sees a strange advertisement on the sale of unclaimed cargo containers, hocks his engagement ring and buys a container that is over a hundred years old. When it explodes in the back of his pickup truck, he learns it contained the lost time machine of H.G. Wells, which has now merged with his red Ford 150 Pickup, and the “Time Truck” is born.

Joe suddenly finds himself on a new road as the world reshapes itself around him. Knobs, levers, fiery glass spheres appear around his truck. A strange rear view mirror unfolds from the car ceiling right in front of him. A mirror with the talking head of H.G. Wells, an avatar created in the future on his own adventures.  H.G. gains control of the time truck and takes Joe to the otherworld of Haven, where the immortal Annunaki dwell.  They are the Sumerian gods of old who serve the creator and inform Joe that he is the reincarnation of the original – Good Samaritan. Now Joe, has been chosen to be – The First Traveler. Joe is no superhero, his super power is his heart and his sense of right and wrong. He uses his American Ninja Warrior fan skills to circumvent sacred temples, and battle evil monsters past, present, and future, gaining companions from one time and another along the way.

So, grab a beer and follow this new blue-collar hero on all his adventures, – “and get the truck out of here!”

Robert W. Cabell has spent three decades working in the New York entertainment industry with giants like Time Warner, HBO, Spelling International, Columbia Pictures, and the NY Post. His first debut novel “The Hair-Raising Adventures of Jayms Blonde” received unanimous rave reviews from coast to coast. In 2012 he premiered “All The Mermaids In The Sea” and 2013 brings the first spin-off series, “The Mermaid Adventures Of Princess Miranda.” He has authored books on humor such as “Jayms Blonde Jokes” as well as his theatrical trilogy of plays on Sarah Bernhardt and Oscar Wilde.  In addition to books and plays he has had his musicals, “Z- The Musical of Zorro,” “Two Hearts Over Easy,” “Pretty Faces – The Large & Lovely Musical,” and “12 Days Of Christmas – A Musical Celebration,” produced in the USA and Europe.