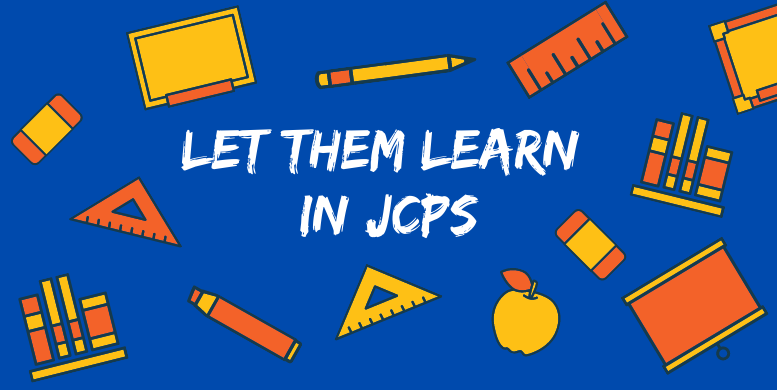 LOUISVILLE, KY (October 9, 2020) – Jefferson County Public Schools (JCPS) in Louisville, Kentucky may become the last major public school system in the country to reopen.  JCPS students – of which there are approximately 100,000 – are in an impossible situation. The Kentucky Department of Public Health and the Kentucky Department of Education have devised a draconian metric which makes it virtually impossible for superintendents to reopen their schools, or said a different way – makes it possible to not reopen their schools.

On July 21, the seven-member JCPS Board of Education voted to begin the school year with six weeks of online instruction on August 25.  On September 29, the Board approved the superintendent’s recommendation to extend online instruction indefinitely, but at least through late October.  As of October 5, Superintendent Dr. Marty Pollio again threatened that the projected return date “could be in jeopardy” due to the metric.  Every other school in Jefferson County and its surrounding counties has nonetheless rejected the use of this unattainable target and have returned in person, safely and successfully since August.  In the coming days, the Board will vote either to commit to a return date or to effectively lock students out of their schools until the fall of 2021.

How is it that students simply fighting for their right to in-person public education cannot find a single champion in their own community?  No Board members, elected officials, or community leaders have been willing to take a stand on this position.  Meanwhile the Board itself cannot agree on what defines safety, suggesting that COVID may not even be the most prevalent or pressing safety issue.  Nor can the Board agree on whether to support Dr. Pollio’s signature project on the upcoming and already contentious Election Day ballot.

Not a single Board member supports a return to in-person education.  In fact, three Board members (Chris Brady, Linda Duncan, and Chris Kolb) have indicated that they will not return students until a vaccine is forthcoming.  In addition, Duncan has gone on the record with a JCPS parent in a shockingly candid email to cite a multitude of disturbing safety concerns unrelated to COVID which make her unwilling to approve a return. Duncan asserted that students using non-traditional instruction (NTI) “love the absence of disruptions in learning caused by kids fighting, threatening others, bullying others, assaulting others, selling drugs, or bringing guns.  Unfortunately, those things happen, especially at the middle and high school levels.”  Duncan effectively admitted that JCPS cannot control their schools, let alone decide about reopening them.

Interestingly, the November 3 Election Day ballot contains a proposed and publicly-contested tax increase in which JCPS would collect an estimated $54 million.  This plan is meeting with resistance not just from thousands of families frustrated by the protracted delays in the return to school and from a non-profit group known as NoJCPSTaxHike.com, but also from five of the seven Board members.  The most high-profile portion of this amount would fund new schools in underserved West Louisville.  Even though this initiative did not have the support of Board members Duncan or Brady when it passed, Dr. Pollio views it as the critical piece of his vision for the future.  As recently as last week, however, Board members Joe Marshall, Corrie Shull, and Diane Porter each voiced concern that the proposal to build new schools, which would allow Black students in West Louisville to remain near home and avoid busing, would actually lead to re-segregation.

The embattled JCPS Board of Education is divided on every key issue before them.  The Board claims that students may be safe to return to school “if supported by data,” yet this “data” is supplied by a state government that was swept into office in the 2019 gubernatorial election largely on the backs of teachers’ unions.  The Board seems conflicted about the very definition of “safety.”  Is safety related to COVID, violence in classrooms, or the potential for violence in the city as it continues to contend with racial unrest related to the Breonna Taylor case?  They have even made conflicting statements regarding whether building new schools would actually result in equity.

The one issue on which the Board is united is locking students out of their schools.  Arguably the one thing that the city of Louisville most needs is to send its students back to school.  It needs to inject certainty into the community through the city’s traditional flagship educational institution, JCPS.  It needs to return working parents to their jobs.  It needs to restore the daily flow of basic resources through its schools (education, adult supervision, food services, face-to-face mental healthcare) to its most at-risk children. The community’s students need in-person instruction, structure and attention now more than ever.  At a press conference to promote attendance in 2019, Dr. Pollio stated, “Nothing has more of an impact on learning in the classroom than actually being in the classroom…coming to school daily puts students in the best position for success.”

This is an opportunity for JCPS to choose to be resilient and prepared or remain fearful and dysfunctional in its irrational and indefensible adherence to meaningless metrics.  If JCPS expects voters to fund its investment plan for the future, it must invest in its students’ present – an immediate return to in-person education before Election Day.