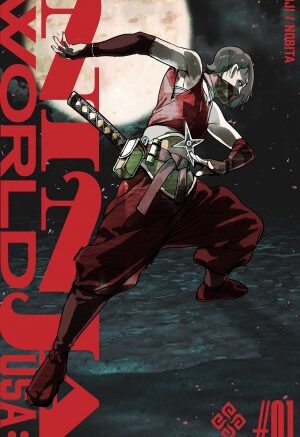 Tokyo, Japan – November 12, 2020 – Japanese comic book publisher, Enmaku is proud to announce that their first comic book mini-series, Ninja World USA will be released on online digital platforms on November 20th. The comic will serve as the starting point for Enmaku’s Ninja World series that will follow different modern day Ninja in different parts of the world.

Ninja World USA tells the story of what happened to Ninja after the end of the Samurai era. When a Japanese conglomerate decides that Ninja are too useful to dispose of, they find themselves secretly deployed to various parts of the world. While under the guise of being businessmen or immigrants they hide in plain sight while undertaking secret missions at the behest of the massive company. As the name implies, Ninja World USA will follow the descendants of some of these Ninja on their modern day exploits in the United States.

Throughout Ninja World is the theme of extinction. Ninja are aware that they are living on borrowed time. They are spread out across the planet with no lord to serve, and their ranks are gradually growing thinner and thinner. In this story Ninja must decide what they should do as their world dies.

Ninja World USA is created by an all Japanese team with a story by Toji, art by Nobita, and featuring mechanical design by Kazuhiko Kakoi (Triggerheart Exelica, Dariusburst). The project is overseen by Shigeki Hoshino (Kowashiya Gen, Kotonakare).

Enmaku’s aim is to introduce the world to the definitive version of the Ninja in an international setting. After the launch of Ninja World USA, Enmaku will be releasing additional stories that take place in other countries like Japan and Mexico so readers can get a better view of the world they’re building.

“The Enmaku team is extremely happy to finally be able to share Ninja World with the public,” stated Hoshino. “Our production team is made up of manga authors, writers and mechanical designers. Nonetheless, we hope to create something that isn’t Manga or an American comic, but a Japanese comic. Stylistically we’re going for something like Franco-Belgian or American comics, but with manga at the core.”

Ninja World USA #1 will be on sale on Comixology and in the Kindle Store on November 20th 2020 in the US, Brazil, Europe, Mexico and many other regions. For the first month it will be on sale for ¢99. After the sale readers will be able to buy it for $3.99. It will also be available on Google Play, iBooks, Nook Books and several other digital platforms.