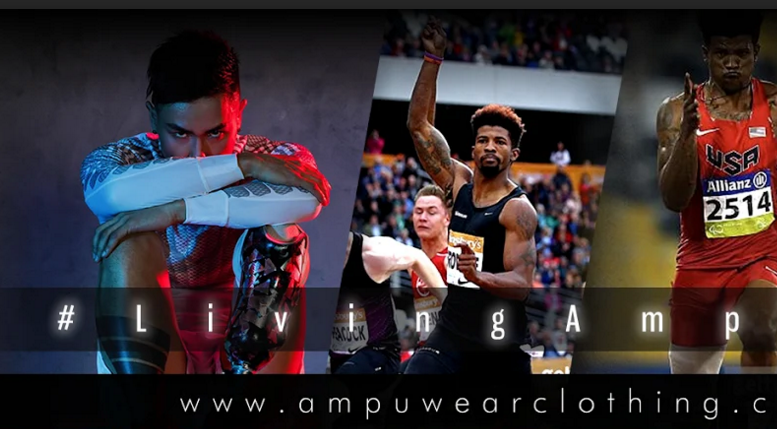 Paralympian Richard Brown Joins Amputee, Entrepreneur and Designer Troy Malone during Limb Loss Awareness Month in effort to raise awareness and support for the 2.1 million people who are living with this disability.

New York, NY – 24 Apr, 2018 – Ampu Wear Clothing Company announced today that Troy Malone, amputee and trauma survivor, is using the month of April to partner with fellow amputees, trauma survivors, and key amputee influencers to raise awareness, education, and financial assistance for the amputee community during Limb- Loss awareness month. The co-founder of the new adaptive clothing line is a Rockford Illinois native, who lost his leg in a freak accident when he was hit on the side of the road by a semi- tractor-trailer while at work.

According to the National Amputee Coalition, there are 2.1 million people living with limb loss in America today, and that number is expected to almost double by 2050. Troy is one of the warriors that chose to not accept defeat. Malone explains, “Living Amp’d Up” is a lifestyle movement and a call to action for fellow amputees and everyday people, that encourages all people to LIVE, and not let their lives be determined by any set back that may arise. Not only are you going to live your life, but you are now going to live it Amp’d up!”

In celebration of Limb Loss Awareness month, Troy is launching a national awareness campaign called “#LIVINGAMPDUP” that is a multi-platform social campaign that will feature individuals sharing “ lived experiences with the disability and challenging the stereotypes that focus on the limitations of losing a limb.

Paralympian, Richard Brown is one of the leading voices in the conversation. In 2007,The United States team sprint runner was in an accident that sent him through a plate glass window, which resulted in an arterial bleed that caused his right leg to be permanently damaged. At press time, Richard say’s “Im really excited to join Troy in this campaign, I had my leg amputated when I was 16 and my whole life changed in an instant. There wasn’t much information out there or many stories that people shared about recovery, life after trauma, or dealing with the disability mentally. I hope that my story, Troy’s, and the others will inspire someone else to not let this disability affect the rest of his or her lives.”

Amputee Influencers, Kima Dima, Kathleen Hawkins, LaKeisha Green, and Allison Rhine, have also pledged to lend their personal stories to the brand’s initiative, and using their individual platforms to raise monies in support of funding programs and services for amputees that provide mental and physical rehabilitative services.

Ampu Wear Clothing Company’s mission is to help fund services for the 36% percent of amputees that experience depression living with the disability. Supporters are encouraged to purchase a “LivingAmpdUp” t-shirt from www.ampuwearclothing.com to raise funds to donate a portion of proceeds to supporting organizations.

Ampu Wear Clothing Inc. will be holding a private reception in New York City on April 26th to showcase items from their new adaptive clothing line.

Press Junket: Campaign Influencers will interview and share stories with members of the press.