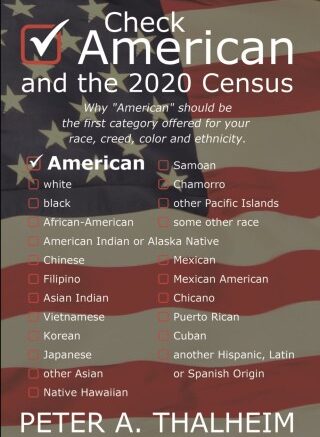 Check “American” and the 2020 Census: Why “American” should be the first category for your race, creed, color and ethnicity.

What color is an American? There is no color, but we are a people whether we were born here or immigrated here. There is no preconceived, conventional category for any citizen. “Some other race” does not cut it for those of us who identify as American. It is an individual’s choice how they see themselves. The self-described label of American is a great equalizer between native born and immigrant. You can’t get any higher than American.

Read About: An immigrant’s discovery and service in the United States Army Reserve and how the Army leads the nation. The author’s experiences in the Army Reserve made clear how much of a color-blind society the Army was creating within. By introducing “American” as an identity, it could become the identity of a vast majority of Americans. Should the legislation in the book become an amendment to the U.S. Constitution? If so, why? If not, why not?

The positive attitude is that America is a melting pot in which all people coming here from their other countries acclimate to how things are done in America. Our union is stronger if we stay together, much like a box of crayons that has been melted together by the sun. As such, we melt together, and when something is melted together, you cannot unmelt it. That is how Americans congeal together into a resolidified whole!

It is long overdue that “American,” be inserted as the first category on any government form that asks your race, creed, color or ethnic background.