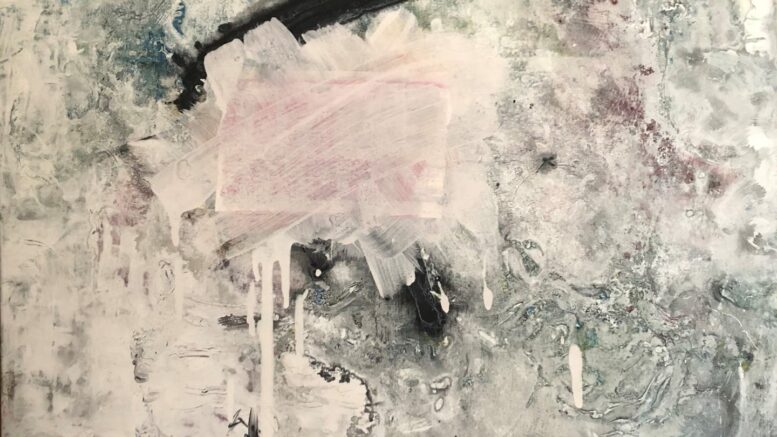 Johannesburg, Sep 24, 2020 – An artist that has been building a solid following has produced a poignant piece for our times. Martin Swoboda a.k.a. @brizoshow on Instagram has been driven to paint a piece in reaction to the #BLM unrest, the activism, the political protest, the politically correct commentary from corporations, and the pop art protest posters carrying profound pleas for humanity.

WHITE WALL, ACTIVISM is an 80x60cm painting by the artist that combines pop art, activism, political protest, unrest reaction, abstract art, #BLM, and so much more.

All this through a worn white wall with black painting which has been whitewashed again. Swoboda, says “The picture provides a commentary on the political unrest and the Black Lives Matter movement in Europe and the USA, how it is reacted to, and the obvious consequences of it – multi-layered, turbulent, but consequently amounting to little change.”

To Know Can Be Art, You Have To Know What Is The Real-World

Staring at any form of artwork is great for the eyes, but its impact is lessened if viewers are staring through eyes and a mind that is void about what it represents. Case in point, to understand the true impact of Swoboda’s artworks, one has to understand the message behind it. So, let’s put you in context.

#BLM is not a new movement. Citizens like Justin Hansford were there in 2014 when the Black Lives Matter thought and spirit went from a hashtag to an international movement. Swoboda has since studied at Howard University and is now a law professor at Howard University. He observes that those first marches only captured national attention for a few days, then people changed focus. The marches, in fact, continued on a smaller scale for more than 300 days.

Mr. Hansford was part of thousands of protestors that vociferously objected to a white police officer’s killing of an unarmed black man named Michael Brown in Ferguson, Missouri.

The opinion of citizens globally, on race and criminal justice, has continued to lean more to the left since the first protests over the deaths of Trayvon Martin and Michael Brown. With the death of George Floyd in police custody on 25 May, public opinion has skyrocketed.

Will The Recent Shift In Opinion Last?

This, as we head towards the last quarter of 2020, is a common question. Media can inspire a quick shift in opinion, followed by a quick dissipation. After incidents like the regular American mass shootings, we see spikes in support for gun control, but the vocality dwindles in direct correlation with the memories.

In addition to the poultice of time, there is also a splintering of opinion.

“I feel like Black Lives Matter has become a trend,” says David Mooney, drummer and bandleader of Day Dream Sessions who play the soundtrack to the street demonstrations in Washington DC. “At first it was about changing the situation at hand, but now you have all these corporations saying they support black people, but they’re just hoping to gain more customers and more money.”

“I think the initial inception of Black Lives Matter is what we believed in and what we were marching behind,” says trumpeter Eric Jackson. “It was really about police brutality and the effects of that on black people. But I think now it’s a multi-layered thing with feminism and LGBTQ and all these different things kind of coupled into it. I think there needs to be a little bit of refocusing. But Black Lives Matter as a message is one I still stand behind.”

Prof Melina Abdullah, a professor of Pan African Studies in Los Angeles and co-founder of one of Black Lives Matters first “chapters,” is proud of how the organisation has deliberately been inclusive with many women and LGBT activists at its heart. “Black Lives Matter has been very clear that we are a womanist movement. And that doesn’t mean that we exclude men, in fact there are lots of strong male leaders,” she says.

“Over the past six years, the overall number of killings at the hands of police has remained relatively stable, and that is not a good thing,” says Prof Abdullah. “However, what we are seeing is that in cities with strong Black Lives Matter chapters, the numbers have dropped dramatically, though this has been offset by increases elsewhere.”

“The hashtag has been instrumental in raising awareness and spreading information,” said Simon Howard, a professor of psychology at Marquette University in Milwaukee who specializes in prejudice and discrimination. “It’s basically cyberactivism. Everyone can play a role because not everyone feels comfortable protesting or being in the streets,” said Howard. “It’s not the end all, but we see how monumental it is when people all over the world are tweeting #BlackLivesMatter and protesting anti-Black police violence in countries like South Africa and France.”

“I’m worried that we’re going to have this mass wave of protests and a lot of people who want to make reforms, but no one with the moral authority to carry this movement to victory,” said Alvin Tillery, professor of political science and director of the Center for the Study of Diversity and Democracy at Northwestern University. “There’s all of these steps beyond getting people to go and march and demand the arrest of officers, and it doesn’t seem like BLM has that stuff figured out. And that’s very consistent with other movements.”

Morgan Smith, who started the organisation BlackoutDC in 2015, was inspired by significant increase in white protestors. “It was inspiring to see that the diversity among protesters is growing,” she said. The previous night she had been tear-gassed, pepper-sprayed and stunned by flash-bangs. “There were even white allies who would go stand in front of the line, between us and the cops, because they knew that because of white privilege, they were less likely to be hurt by the police.”

With the protest have come negative sides like looting. This happens with every mass protest that is trying to revolutionise deep seating behaviour in society. As the ever eloquent Mr Obama said in June of this year, “For those who have been talking [negatively] about protests, just remember: This country was founded on protests,” he said. “It is called the American Revolution.”

Since 2014, the protests have continued because black deaths at the hands of police have continued. In the USA alone it has been at a rate of more than 1,000 deaths per year and 99 percent of them have not resulted in charges against the officers.