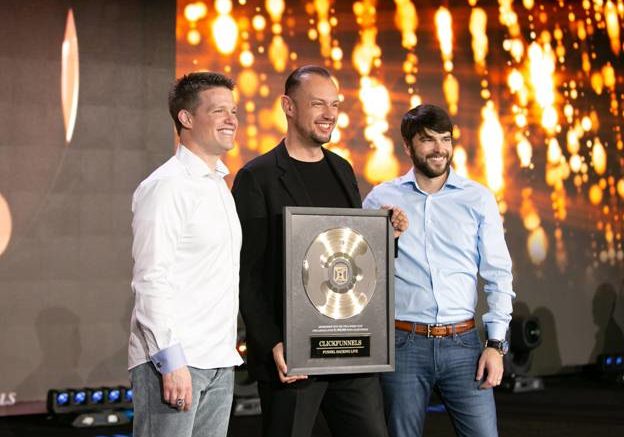 Vito Glazers, the renowned American entrepreneur, digital PR and reputation management expert based between Chicago, IL and Hollywood, CA continues to set records and pioneer new growth in the world of digital public relations. A well-seasoned digital publicity expert and founder of One World Publishing, he continues to deliver on his vision of bringing together the creative media world, digital publicity, and celebrity and influencer driven e-commerce, setting himself apart in the the highly competitive Hollywood public relations industry.  Entrepreneurs and brands in the industry have certainly acknowledged and accepted his rising stronghold in the media world. Besides his numerous achievements and awards he has received as part of his career in digital PR, he recently won the prestigious 2 Comma Club award. The prominent award is given to digital entrepreneurs who earn more than $1,000,000 through ClickFunnels.

So, what is ClickFunnels? It’s an online sales funnel builder that helps businesses market, sell as well as deliver their products online. The online application simplifies online marketing, selling, and delivery of products and services by offering users various funnel alternatives that are pre-built for a particular business, service or product. Traditional sales funneling usually involves dealing with web hosting, email auto responders, landing pages, and more and ensuring everything works in unison. This is not only hard work, but also time intensive and costly. On the contrary, ClickFuinnels helps to simplify the process of developing a marketing and sales funnel from the ground up because it combines all the key elements required to set up a functional and effective sales funnel.

Although ClickFunnels makes it easy to create a marketing and sales funnel, it requires some exceptional skills and experience for you to make a mark in digital entrepreneurship. And Vito Glazers leveraged his expertise in digital marketing to create a simple funnel that allowed him to grow a seven figure publicity business in a short amount of time. He is among several other entrepreneurs who have managed to exceed the $1 million dollar mark through a single funnel on ClickFunnels and has now received his place among the winners of the 2 Comma Club Award. Some of the renowned entrepreneurs who have won the award include real estate investing master, Joe McCall, fitness videos and TV infomercial producer James Kunitz, among many others.

Vito received the prestigious award at the Funnel Hacking Live 2020 event that was hosted in Nashville, TN from Jan 29th to Feb 1st 2020. He officially received the award on January 31st 2020 in the presence of a gathering of more than 5,000 attendees of the event, many of which included renowned entrepreneurs from various industries. Some of the notable entrepreneurs present at the 2 Comma Club Award include Tony Robbins, Prince EA, magician Julius Diel and numerous other celebrities and entrepreneurs.

Vito has truly demonstrated his ability to reason and think well-outside of the norms in the digital PR business by claiming a spot among entrepreneurs who have won the 2 Comma Award. He is certainly riding on the crest of this new wave of marketing and proved that he is a thought leader in the field of influencer marketing. The 33-year old founder of One World Publishing has over the past 15 years established himself as an advertising expert and content producer, helping more than 150 entrepreneurs use celebrities and media to tell their stories.