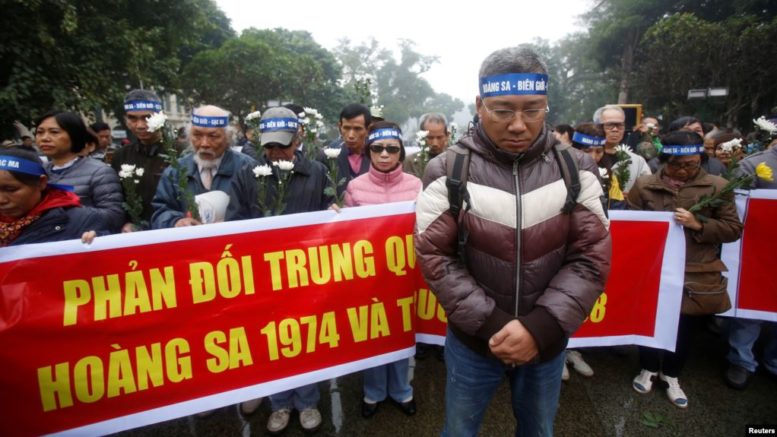 Based on a Referendum Starting May 2!

(Vietnam, 05/26/2020) — Close to 400,000 Vietnamese have participated in a referendum (https://bit.ly/35NmrjH) started by six organizations, including Interfaith Council of Vietnam, Vietnam Nationalist Party, Hoi Luan Thang Nghia, Viet 2000, Voice of Vietnamese Americans and Vietnam Democracy Center. The list of organizations has since increased to 42 and is growing. The result to date is a staggering 95% of the people demanding the Vietnamese government to take China to international courts for its aggressive actions in the East Sea of Vietnam (South China Sea).

According to US Secretary of State Mike Pompeo, “Beijing has moved to take advantage of the distraction, from China’s new unilateral announcement of administrative districts over disputed islands and maritime areas in the South China Sea, its sinking of a Vietnamese fishing vessel earlier this month, and its ‘research stations’ on Fiery Cross Reef and Subi Reef.”

Early numbers from the referendum speak loudy of the will of the Vietnamese people, despite the Communist regime’s oppression. The referendum is getting popular support Vietnam. Vietnamese fishermen have lost their livelihood since China has illegally attacked their boats and enforced a fishing ban within Vietnam’s Exclusive Economic Zone as designated by the United Nations Convention on the Law of the Sea.

The chairman of the influential US Senate Foreign Relations Committee Sen. Jim Risch said that “China’s deeply concerning activities in the South China Sea are examples of the Chinese Communist Party’s ‘blatant intimidation’ of its neighbors to assert its claims.”

Despite its positions as chair of ASEAN and president of the United Nations Security Council, the Vietnamese government continues its traditional feeble response. This is in stark contrast with the will of the Vietnamese people as demonstrated in the referendum.

Incidentally, the referendum also puts the competing powers in the region on notice. It is increasingly clear that the Vietnamese people have a unified stand and unequivocal response to the imbroglio. As the referendum promotes a universal sentiment of anti-Chinese hegemony among the populace, those who ignore it do so at their own peril.

On this Memorial Day, the organizers of the referendum took time to commemorate the ultimate sacrifice of US servicemen and South Vietnamese soldiers in the Vietnam War. Forty-five years after, their deaths are still a reminder that freedom is never free and, in the words of MLK, “is never voluntarily given by the oppressors, it must be demanded by the oppressed.”