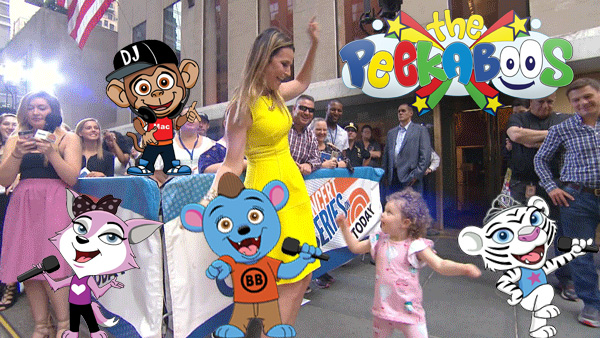 Preschoolers and early elementary kids are invited to a dance-off across North America to win a cash prize and to dance with The Peekaboos.

The Peekaboos are launching a nationwide search for kids who love to dance on their Facebook Fan Page which has over 75,000 Likes. Because The Peakaboos are in pre-production for an animated television series, executives from companies such as Disney, Nickelodeon, Cartoon Network and PBS Kids are all keeping an eye on the The Peekaboos Facebook Fan Page. The result could lead to young stars being discovered, or at least being noticed, by industry executives and talent agents. The Grand Prize is $250.00 cash and a .gif animation of the winning child dancing with The Peekaboos. The winning video will be marketed virally throughout North America and potentially around the globe.

Recent statistics released by Zephoria Digital Marketing in September 2017 show that worldwide, there were over 2.01 billion monthly active Facebook users for June 2017. This is a 17% increase year after year. 76% of Facebook users are female, and the most common age demographic, at 29% of users, are age 25 to 34. This age group happens to have the most children 8 years old or younger. This is the exact demographic that the big companies that market to children are catering to.

What does this mean for those parents who believe their child is destined to be a star? Simply put, becoming famous through viral videos has become more and more common these days. Just about every week a new video of a cute kid or cuddly kitten goes viral and a person or pet becomes famous on the Internet. The power of viral videos, coupled with the mass exposure to high level executives looking for the next child star is a recipe for what some in the industry call a “lucky break.”

For kids in preschool or early elementary school, the “right place” to be is on The Peekaboos Facebook Fan Page, and the “right time” is Monday, October 9th through Saturday, October 21st when The Peekaboos Cutest Kid Dance Contest will be in full swing. This will be an extremely rare opportunity for parents to show the world how cute their kids are by uploading a short 10-30 second video clip of their kid dancing to a song by The Peekaboos.

To learn more about The Peekaboos and the contest, go to www.ThePeekaboos.com.

Online entry for the The Peekaboos Cutest Kid Dance Contest can be found on their Facebook Fan Page at www.facebook.com/thepeekaboosmusic.

The contest entry deadline is at midnight on October 21, 2017.