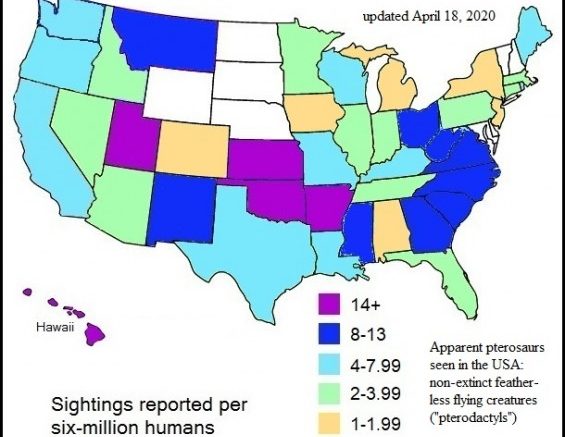 The nonfiction author Jonathan Whitcomb, of Murray, Utah, in 2017 and 2018, interviewed four eyewitnesses of an apparent “pterodactyl” in central Utah. He now declares that those reports from Draper, Salt Lake County, help distinguish Utah in a map showing where similar sightings have been reported across the United States.

On April 18, 2020, Whitcomb made public that map and now asks people to contact him if they have seen anything similar, wherever it was. He and his associates look for any kind of support people may give to their research and to their searching for non-bat featherless flying creatures that some persons call “flying dinosaurs.”

Over the past 16 years, hundreds of eyewitnesses have contacted Whitcomb from five continents, and some of those were from 41 states of the USA. Three of those states now stand out in the number of reported sightings of apparent pterosaurs in relation to each state’s human population: Hawaii, Utah and Arkansas, in that order.

Whitcomb admits a few challenges for this branch of cryptozoology: “Bigfoot is a far better known cryptid, yet my associates and I face a bigger problem than competition for attention: generations of Western tradition that insists all species of dinosaurs and pterosaurs became extinct millions of years ago. That controversy has given us negative attention. On top of that is the possibility that in some areas of the world somebody might see a frigate bird and think they had witnessed a non-extinct pterodactyl. Not everything that looks like a pterosaur is one.”

One of those areas is around the Hawaiian Islands, where the great frigate bird may be seen by over a million tourists each year. From a distance, those birds may appear to be featherless to some naive tourists, even though Whitcomb insists that at least some of the reports he receives from Hawaii are clearly not due to any frigate birds being misidentified.

Yet if skeptics eliminate Hawaii from the list of 41 American states with reported pterodactyl sightings, because of frigate birds, where does that leave Utah and Arkansas? Whitcomb loves to point out that problem with the frigate-bird explanation for reports of living pterosaurs in general. He declares, “Oceanic frigate birds do not congregate far from the ocean and surely not in Utah, Arkansas, Oklahoma or Kansas, where pterosaur sighting reports dramatically stand out.”

In the past thirteen months, Whitcomb has uploaded to Youtube 54 videos on sightings of animals he believes are descended from ones closely related to pterosaurs known, by paleontologists, from fossils. Years earlier, he wrote a scientific paper hoping to encourage scientists to take eyewitness sightings from Papua New Guinea seriously: “Reports of Living Pterosaurs in the Southwest Pacific.” It was published in a peer-reviewed scientific journal in 2009. In recent years, most eyewitness reports sent to him have been from North America.

Whitcomb led an expedition in Papua New Guinea in 2004, where he searched for the ropen of Umboi Island. Since then, he has written five nonfiction books on modern pterosaurs and has published over a thousand blog posts and other web pages on that branch of cryptozoology. His Youtube channel is “Protect Animal Life.”

The data used to construct the map of sightings in the United States, showing the dominance of Hawaii, Utah, Arkansas, Oklahoma and Kansas, was obtained from the site Declaration on Eyewitness Reports of Apparent Living Pterosaurs and from the 2010 census.