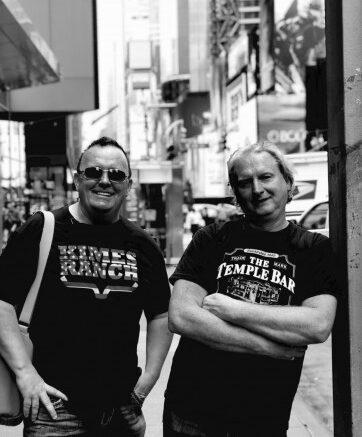 Las Vegas, CA – Sep 1, 2020 – 60 shows. 50 states. 40 days. What could go wrong? Find out what happens when beloved Irish band, The Black Donnellys set out to break this ambi- tious world record when Vision Films and Frequency Pictures present An Irish Story: This is My Home.

Following The Black Donnellys’, Dublin born Dave Rooney and Dave Browne’s journey across the United States, this joyous, inspiring and hilarious documentary shows the incredible power music has to bring people together and the positive effect that immigration has had on the country. Directed by Karl Nickoley and featuring original music by The Black Donnellys, An Irish Story: This Is My was released on DVD and video on demand just in time for St Patrick’s Day on March 17, 2020.

The Las Vegas-based Irish band, The Black Donnellys, a highly regarded and talented live act, are no strangers to world records, with Dave Browne currently holding the Guinness World Record for marathon  guitar playing for over 114 hours, while the band in 2014, collectively broke the world record, in Las Vegas, for the longest concert ever held. (372 hrs)

To avail the Movie from multiple platforms

“This Film is a Hoot. Fair play to these two Madmen! – Glen Hansard (The Frames/Once)

“Finally got to see the Movie. What an amazing achievement by the boys. One love, Christy X.” – Christy Dignam (Aslan)