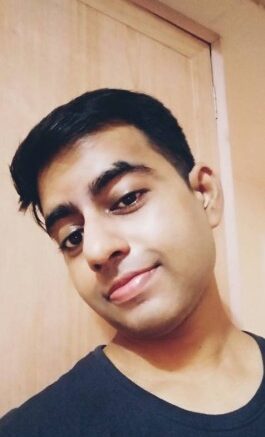 When our world was brought to a standstill due to the pandemic, two amazing techies Sudarshan Senthilvel and Parul Tejaswini teamed up to create 600+ Instrumentals and 100+ Songs under lockdown that are now available on 150+ music streaming platforms across 183 Countries that have been curated to the highest standards of Digital Lossless Audio formats. Inspired by the Indian movie 99 Songs by A.R. Rahman, they decided to create as many songs as possible and have set a real-world example of an independent musical duo rising up to unimaginable heights on the global pop scene.

Sudarshan is a Gifted Singer-Songwriter & Music Composer known for his prolific use of Software Technology in the Music Industry. He owns 100% of the Master Recordings, Songwriting Royalties, Phonogram, and Sound Copyrights on all his musical works under the legal name “Sudarshan Senthilvel”. He is one of the new waves of independent musicians who think ahead of time and has refused on many occasions to sign up to a major record label deal. He has capitalized on the power of music streaming services to distribute his musical works to a worldwide audience spanning all across the globe. He believes in a more open future for Indie Music in the coming years for musical artists.

Born to Senthilvel Rathinasabapathy (a mechanical engineer) and Sunandha Parthasarathy (a Carnatic vocalist & veena player), Sudarshan is an electronics engineer, and a computer scientist, with a decade of experience with the global top 10 IT Giants. He started his musical journey when he was just a 6-year-old kid, under the guidance of his mother, playing violin, veena, and singing intuitively without being too hard on himself or forcing tunes out of his head. Sometimes it feels as if he is born for music and is a natural artist, who has learned everything on his own with little formal music training. Presently, he spends his time weaving aural magicusing software musical instruments. Sudarshan is predominantly an introvert, with the right hemisphere of his brain (creative) as his dominant personality, although he believes in a whole-brain living. He rarely gets to spend time on social media. All his social media accounts are monitored and maintained by his PR Team. Instead, he believes in channelizing all his energies towards composing music. He has devoted his entire life to music and to spreading Love and Positive Energy to those around him. He says he has no time for anything other than the ‘Blissful Musical Oasis’ he has built for himself in his mind. You can call him a ‘Musical Hermit’!

His current ‘magnum opus’ works in the music industry include:

Magenta ML Magic – The World’s First music album composed with 100% Machine Learning Algorithms for generating MIDI files used in Logic Pro X and Ableton Live without any human input as an extension of Google’s Open Source Project Magenta. The aim of this project was to augment human beings with neurologic disabilities like Alzheimer’s (who find it difficult to learn and memorize music theory concepts) or ADHD (who find it difficult to sustain their attention while composing music for a long time).

A Song A Day – A Series of Vocal Singles that runs non-stop for months as ‘seasons’ with rapid idea generation and online music deployment.

The duo’s target is to win a Grammy award someday. The Grammy is the only global music industry award that is based solely on the quality of music and not the artist’s popularity or social media affluence or geographic location.

The duo is not into the film industry by any means. Sudarshan says, their art is for your ears and not your eyes. He feels one of the biggest reasons why Indians don’t win a ton of Grammys is because all talented musical artists are lured by the film industry. Sudarshan has turned down so many golden offers to do film scoring in Indian movies after his Modern Musicianship at the Berklee College Of Music in Boston, MA. In the west, films are a different ball game that is seen as a different skill set from the multitude of musical expressiveness & freedom that a songwriter has. Hollywood has a separate pop music scene apart from films. He learnt from his peers in Los Angeles that movies are not the ultimate destination for a stellar multi-talented musician, especially a singer-songwriter. They want to think beyond the film world. In the Indian industry pop music is often equated with films alone and we need to break that mould.

To be a singer-songwriter in the global arena requires a strong command of English, a gifted voice, and an inherent ability to be a musical soul, along with supreme algorithmic music tech competence acquired by a rigorous lifelong thirst to keep learning. An impressive business acumen would be a bonus.

Unconventional nextgen pop music is what Parul & Sudarshan’s research is all about. You are in for an amazing musical treat by the duo for years and ears on your favorite music streaming platform of choice for the rest of their gifted lives ahead.