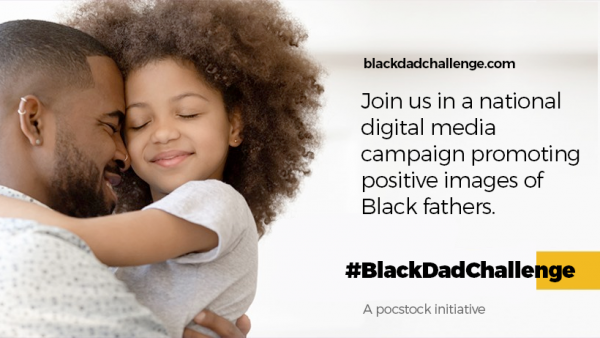 The multi-part social campaign, called ‘Black Dad Challenge’, is a call-to-action for Black fathers, and those that love them, to share photos and/or videos of themselves with their children via social media using the hashtag #BlackDadChallenge. Participants are encouraged to tag at least 5 other Black dads in their post as a show of support and pride.

“There is a stereotype, often fueled by inaccurate depictions in mainstream media, that Black fathers are deadbeat dads,” says pocstock CEO Steve Jones. “That perception does a disservice to all hard-working Black fathers who are active and engaged in the upbringing of their children.”

For many Black fathers, the viral Girl Dad movement, following the death of NBA legend Kobe Bryant earlier this year, was the first time positive portrayals of Black fathers were displayed in mass media. “These images need to be out there because representation is one of the ways we can begin to effect change,” says Jones.

pocstock is a Black-owned media agency specializing in creating and marketing images that showcase the diverse pigmentations, lifestyles, fashion, and cultures of people of color. pocstock’s mission is to increase representation through diversity with bold, real, and authentic images of people of color.