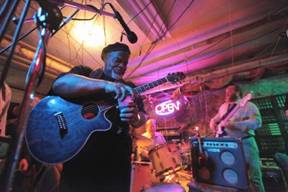 Kansas City, MO – September 3, 2018 – Kansas City music legend and community activist, Danny Cox, announced the release of the new song, “We the People,” now available on YouTube. The song represents a collaboration with his son, Jo, and the Australian band Stormcellar. The song is a call to action for people to exercise their right to vote.

“I’m a student and a warrior for the oral tradition,” said Cox. “As we get older, we don’t have the energy to get out in the street like we do when we were young. I want people to get involved. That’s all we have to do.”

The Schoolhouse Rock- inspired anthem reminds individuals of who is in charge and where the true source of governmental power lies – with the people. Voting is a right and the responsibility of every American. It’s one that Cox takes very seriously and wants others to do the same, particularly minority communities.

The song speaks about timely topics relevant to today’s political climate. “We the People” is an appeal to individuals not to surrender their power to politicians, to rise up, and to stand up and be counted. The voting anthem eloquently reminds people that they may feel powerless, but “No matter what politicians say, our rights are not for sale.”

The musician is no stranger to musical and political activism. He began going to jail in the eighth grade for picketing and standing up for the values in which he believes. He just turned 75 and is still attending conferences and other events to discover how to better serve his community.

Cox had the opportunity to meet the band Stormcellar when they toured in the U.S. and performed at Cox’s fundraiser for Harvest International. The band set to work expressing his commitment to activism and the song “We the People” was born.

“‘We the People’ may be the most important message of our time, using music to communicate the empowerment of voting,” said Cox. “We’re going to have the world singing it. Get up off your ass and vote! No matter where you are!”

Danny Cox began his professional career in the 1960s performing on a Hootenanny Folk Tour. He’s recorded albums for ABC Dunhill, Casablanca, MGM and others, and partnered with Good Karma Productions. He recorded “Kansas City-Where I Belong” in 2011 and the short film “Up Close and Personal.” In 2012 he wrote the music, lyrics and starred for the musical play “Fair Ball.”

Stormcellar is a pioneering 21st century Australian Roots Band with a string of critically acclaimed albums, four U.S. tours and a decade of live performances. They’ve gained media attention for their viral music videos and have been featured across the U.S., Australia and Europe in print and broadcast media. They’re one of the first Australian bands to write for old school, original U.S. blues and soul legends. They’re currently working on the release of their 10th and 11th albums and the accompanying videos.